The large bed occupies almost a quarter of a room. Besides the bed is a sewing machine, with a brand-new suitcase piled on top of it.

She shares it with Saraswati Darji, 39, a fellow returnee migrant worker, who like herself, and hundreds of thousands of other, have had to return to Nepal since the pandemic started.

Bimala Shahi looks despondent as she fries the vegetables from last night. She cooks only once a day, and then reheats it, so that she can dedicate more time to her work.

“I am earning less than half of what I did in Kuwait. If only I could go back, I would go right now,” she says.

It is estimated that three million Nepalis are working abroad, mostly in the Middle East. They represent about 10 percent of Nepal’s population, and most of them are 20–40 years old, in their prime age of productivity.

It is estimated that women make up 12 percent of the country’s total migrant workforce.

From a town in southern Nepal, Bimala Shahi came to Kathmandu when she was 11 years old to work in a garment factory.

After her husband left her alone with the children, she had problems making ends meet. Working as a street sweeper for the municipality and washing clothes in her free time, she would earn 7,000–12,000 rupees per month, equalling approximately USD60–100.

When her two sons both needed important health care at the same time, the costs became overwhelming. Bimala left her children behind with neighbours and went abroad for work. That was in 2015. She came back to Nepal when her visa in United Arab Emirates ran out and then went to Kuwait in 2017.

“Every morning and evening I cried when I thought of my children. But then, every time I got my salary, I remembered that now my children will be able to eat like normal people. That kept me going. My children also wanted me to go abroad for work,” Bimala Shahi says.

She travelled without a formal permission through an agent who arranged for passport and contacts. The money she made – USD250–300 per month – was deposited into her neighbour’s bank account.

Since 1985, Nepal’s government has repeatedly restricted women’s opportunities to migrate for work. The latest prohibition came in 2017 when the government banned Nepalis from going abroad to work in the informal sector.

This decision disproportionately impacts women, as most informal sector workers are women who take positions as domestic helpers.

In February 2021, the government proposed that women under 40 years of age should receive written permission from their family or local government office before travelling abroad.

Women still migrate, often travelling on tourist visas, but the lack of documents deprives them of government insurances and support if, for instance, their passports are confiscated by employers.

The government states that the abuse workers face in the informal sector is the reason for such restriction. That this abuse indeed exists is something that both Bimala Shahi and Saraswati Darji can attest to.

“In the first place I worked in Kuwait, I had too much work. I did not get enough to eat and did not get a single day off. When I asked the employment agent for another job, after a month, my salary was withheld,” says Bimala Shahi.

Her roommate Saraswati Darji has similar experiences to share.

“A chandelier that I was cleaning fell down and cut my hand. My mistress called her husband, not to take me to the hospital but to beat me up. After being abused for a while, I ran away. But soon the police nabbed me because I did not have an ID card with me, and I was jailed,” Saraswati Darji says.

Both Sarasawti Darji and Bimala Shahi had their passports and identity documents confiscated by their employers, so that they would not leave. Despite that, Bimala Shahi could not take the beatings and ran away. She left her passport behind, losing what little legal status she had.

“We had no money saved up, since we used to send our earnings to our children every month,” Bimala Shahi says. “We lived on the Kuwaiti government’s aid for weeks.”

In March, the Kuwaiti government announced an amnesty for workers residing illegally in the country and offered to pay for their airfare to go back home. But the Nepalese government had already banned all incoming flights as a response to the pandemic.

As the plight of migrant workers abroad grew worse, several rights-based organizations called the government’s attention to the situation.

In June, responding to a writ petition, the Supreme Court of Nepal ordered the government to repatriate workers stranded abroad due to lack of money.

But the government has rescued only 138 individuals in dire need. Kuwait organized flights for a few hundred, among them Bimala Shahi and Saraswati Darji. They were lucky; many migrant workers had to pay for the repatriation flights themselves.

Bimala Shahi arrived in Kathmandu with no money at hand.

After 15 days of quarantine an NGO helped her with a basic survival kit and some money. Neither the government, nor local authorities, have offered her assistance. She is back to square one, working in a garment factory again, together with Saraswati Darji.

They are paid at a piece rate and barely make USD85–130 per month. Of that, 50 USD goes towards paying rent for the room. Bimala Shahi is torn between her need to provide for her children and her desire to be with them.

“When I remember all the abuse and difficult conditions of working abroad, I don’t want to go back. Who doesn’t want to be with their children and ensure that they grow up well? I would miss that. I would worry every moment. But it is up to me to provide for them, and I will go back to the Gulf to work as soon as I can,” says Bimala Shahi.

Number of Nepali migrant workers repatriated due to COVID-19: 303 000. 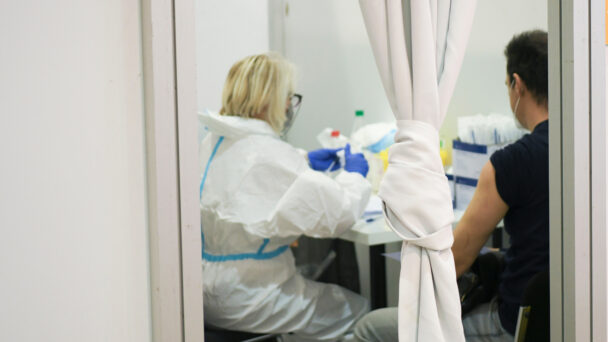