KIKUYU TOWN. Decades later, George Gachuhi, now 34, comfortably sits on the driver’s seat to one of these monster machines to drive a distance of over 1100 kilometres on dangerous roads of the both Kenya and Uganda. The Mombasa to Kampala Route is one of the most active highways in Africa.

We meet with Gachuhi as he changes a worn out tyre at Kikuyu area, on the outskirts of Nairobi.

He brings the engine to life shaking his beaded bracelet bearing Kenya national colours. Hanging on the dashboard is a crux fix.

He has just negotiated almost five hundred Kilometres from Mombasa Port to Nairobi and is eager to drive another 140 kilometres to Nakuru by evening to meet his wife and the three children of 10, 8 and 3 years who he has not seen for several weeks.

“We always long to meet each other after a long journey. My family is aware of the danger that these roads.”

WHO estimates that between 3 000 and 13 000 Kenyans lose their lives in road traffic crashes every year. The majority is pedestrians, motorcyclists, and cyclists. Trucks contribute a significant number of these fatalities.

“Often, tiredness is the reason. We drive for hours without stopping because we have to ensure our cargo reaches destination on time. And you cannot stop at some towns because you risk being robed,” Gachuhi says, telling me about a colleague who was attacked by armed robbers who broke into the container he was transporting. It resulted in sustained deep cuts on the head and a lost cargo. 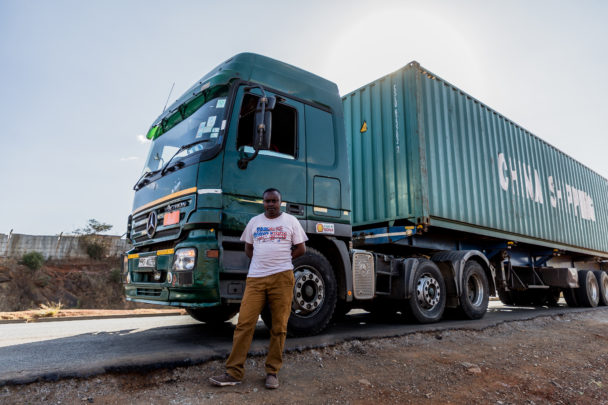 We pass Limuru. In the escarpment, where a younger Gachuhi would camp for hours admiring trucks, we find a police checkpoint.

“They just want money from us, nothing else.” True to it, Gachuhi climbs out of the trailer, with his Drivers licence booklet in his hand and gives it to a police officer. Without much niceties, the officer signals Gachuhi to continue. “I had put 100 shillings in the booklet, he has just picked on that and let me go.”

But why are you giving him money while you have not committed any offense? I ask. He looks startled by the question.

“That is the way it works. Otherwise, he will look for issues to fix me and delay my journey. Last night a police officer wanted to charge me that my truck was too noisy and smoky. I had to give him a bribe,” he says.

Police in Kenya, especially traffic police officers, is one of the most corrupt institutions in the country.

In a month, George takes home a flat salary of 17,000 Kenyan Shilling (1 500 kronor). This amount is not enough for a decent urban rental and the family’s living expenses.

For every trip he makes to Kampala and back to Mombasa (round trip), he earns an extra 10,000 Shillings as millage allowance. This allowance he drops with his family on his way to Kampala. He keeps little bit for food on the way and for bribes.

He estimates that there are about twenty police checks on the Kenyan site each asking for a bribe.

I ask him if he is represented by any workers union and he laughs loudly. “Unions are for those employed by big companies. My employer is an individual and if I joined a union, he would fire me.”

Nicholas Mbugua, secretary general of the Kenya Association of Long Distance Truck Drivers, is conscient that individual owners often prohibit their drivers from joining the union. Their 8 000 members are mostly employed at bigger companies.

George Gachuhi’s impression is that the unions are too weak, meaning that even those that are in unions do not get a fair deal. George believes that these unions are only concerned with their own welfare and do not address critical issues like the drivers’ dwindling earnings.

”In the end, the employers who determine the rates, but we try to make sure that they follow the statutory minimum wage”, says Nicholas Mbugua.

He is aware of the problems with the traffic police officers’ expectations to have bribes.
”We haven’t got rid of that in spite of an institutional collaboration with the commission for ethics and anti-corruption”, says Nicholas.

Last year, a new railway from Mombasa to Nairobi was inaugurated, constructed with Chinese funding. The distance from Nairobi to Naivasha is about to be finished. The intention is for the rail to reach Kampala and possibly Kigali.

One reason for building the railway was to decongest the Kenyan roads and remove trailers from the main highway. The competition from the governmental supported train has already affected the truck drivers.

George constantly bring up how the business goes in the wrong direction.

“I used to do two trips per week. Now there is no cargo to transport and if you make a trip per week, then you are very lucky,” George notes. He says the situation is expected to be worse once the railway reaches Kampala.

We leave George Gachuhi at Lakeside town of Naivasha where he goes for his lunch. Looking straight at the road ahead, he tells us he still loves his childhood desire. Yet he sees the end.

“I want to set up a small business in Nakuru. After 10 years on the road, my body is tired and I need to be close to my boys.”

Kimani Chege/ freelance journalist in Kenya who writes for Swedish publications through the organization One World.