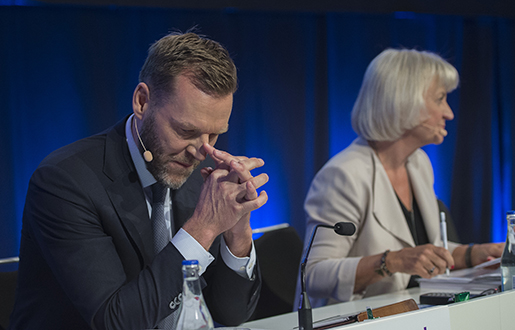 “The pearl of Telia.” Those are the words the Swedish telecom company Telia uses to describe it’s ownership in Turkcell, a joint venture with ownership and board representation that connects with both the Turkish and the Swedish governments. Now, after a recent sex abuse scandal, Turkcell wants to censor Twitter.

– Turkcell is a great company, said the CEO of Telia Johan Dennelind this week, as he stood in front of the company’s shareholders – small investors, venture capitalists and representatives of the Swedish government.

In the past, Johan Dennelind has named Turkcell  “The pearl of Telia”.

One of the strategic goals of Telia is to support human rights and freedom of expression, seemlingly at odds with Turkcell’s intent to censor Twitter.

In late March, Turkcell turned to an Istanbul court and with a demand: Twitter should delete thousands of tweets that the company deems insulting.

– To my knowledge, this is the first time a telecom company seeks censorship in this manner, says Mehmet Onur Yılmaz of Turkish human rights organization Gündem Çocuk.

After a quick examination, the Court concluded on April 1 that 864 tweets should be deleted, the Turkish newspaper Diken reports.

Twitter, however, has refused to delete the posts, citing freedom of expression. Turkcell continues to push the case.

With a 38 percent stake in Turkcell, Telia is the largest individual shareholder in the company. The Swedish state in turn owns a large stake in Telia.

Turkcell’s board of directors include former ministers who have served in Erdogan’s government. Among them are the former police chief and culture minister Atilla Koç and former energy minister Mehmet Hilmi Guler.

– We have asked Turkcell questions about this particular case, but our ability to influence is not that large, because we don’t have a seat on the board, says Henrik Westman.

The ownership structure in Turkcell is very complicated and consists of several holding companies. It is the Turkish state, through the Capital Markets Board, that decides who gets to sit on the board.

Henrik Westman says that Telia do not have much influence in Turkcell, thereby making it harder for them to act in the case of Twitter censorship.

However, an Arbetet Global investigation shows that the Turkish Capital Markets Board has completely followed Telia’s suggestions when appointing the Turkcell board of directors.

Telia’s two candidates were both accepted: the experienced business leader Erik Belfrage, who is chairman of the International Council of Swedish Industry, and Jan Erik Rudberg, who for many years held high positions in Telia Sonera.

Even so, Telia downplays their importance: “All board members are independent, they do not sit there on our mandate” says Henrik Westman, head of media relations of the company.

The question of Telia’s influence on the board is important, since Turkcell is in the midst of a political storm.

Recently, however, it emerged that a teacher at the foundation had raped ten children in the organization’s premises.

The case has received a lot of attention in Turkey and the prosecutor sought a sentence of 600 years in prison. The foundation has been drawn into the public debate, being heavily criticized for not doing enough to combat sex abuse.

The leader of the main opposition party CHP, Kemal Kılıçdaroğlu, reacted by accusing the family minister of ”laying down in front of someone”, which was interpreted by many in Turkey as a sexist comment and led to President Erdogan calling the opposition leader perverse.

When Turkcell once again embraced the foundation’s work, Twitter erupted with activity.

The company was called “pimps” and “paedophile huggers” and the hash tag #Tecavüzcell (Rapecell) was created.

Some Twitter users wrote that they were going to change operator and encouraged others to do so as well.

One of these users is guest professor Umut Özkirimli at the Center for Middle Eastern Studies at Lund University in Sweden.

“I’ve written two tweets where I wonder which company I should turn to in order to avoid a company that supports a rape organization”, says Umut Özkirimli. Now he risks having his tweets deleted.

In an email to Arbetet Global, Turkcell responds to the criticism. The company writes:  “The allegations of Twitter censorship by Turkcell do not in any way reflect reality. Portraying this as a restriction on communication is grossly inaccurate… Turkcell has initiated legal action to block access to defamatory and insulting content in order to protect its legal rights and commercial reputation.”

Turkcell did not want to comment on the Swedish owner Telia reacted when the company went to court to have Twitter posts deleted. “We do not comment on our shareholders’ positions on any issue”.

Turkcell has a complicated ownership structure with many holding companies. Telia states in its annual report that the company owns 38 percent of Turkcell. Two other major shareholders are Turkish Çukurova Russian and LetterOne who, according to Bloomberg, each own 13 percent of the company.

This is not the first time Turkcell is in media focus. In the spring of 2012 Arbetets investigating reporter Esref Okumus wrote that Turkcell was behind half of all wiretappings conversations in Turkey, actions that led to several trade unionists being prosecuted and sentenced to long prison terms.

During the shareholding meeting this week Telia Sonera changed name to Telia Company, although it will continue to market itself under the name Telia. The group also announced that during the year will try to wind down its operations in Eurasia and selling companies in seven countries. The Group’s presence in several dictatorships have been strongly questioned, among other things, after a disclosure of bribery in Uzbekistan. Telia Company will in the future focus more on the Nordic and Baltic markets.