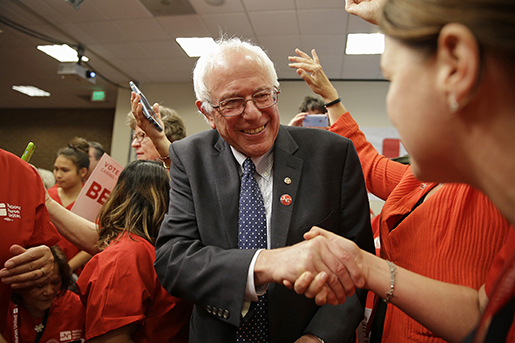 After Bernie Sanders’ win in New Hampshire, the support for him is likely to grow around the US, and especially among grassroots. The labor movement, however, continues to be divided between on whether to support Clinton or Sanders.

Holly Miller is National Director of public and community advocacy at National Nurses United. She has been working intensively with the campaign ”Nurses for Bernie”, travelling with a bus that has been very visible in both Iowa and New Hampshire. Arbetet Global interviewed her by phone in New Hampshire.

– We would say that Bernie Sanders actually took the nurses decision. We have been leading a campaign to cure America for a long time, a signature piece of which is our Robin Hood Tax, which would fund college for all and a single payer healthcare system. So really, we are just pleased that Bernie is on our page, and we consider this our movement.

But is his proposal of a new public healthcare system the main reason?

Yes, his proposal of a single payer healthcare system is a hundred percent at the heart of the nurses’ support for him, but that’s not the only piece. He is leading the same campaign to cure America, he is saying that we need to go to Wall Street, which was bailed out during our financial crisis and has not turned around and done anything for the public good. And he is saying that it is time to heal America by making sure that people are not homeless, our children not hungry, and that people can be well educated and have the health care they deserve.

The workers’ movement is divided between Sanders and Clinton. Is there something that could change that, you think?

– The rank and file is going to demand from their unions that they recognize that Bernie is the candidate for labor. Workers know that Bernie sides with them. His record with labor is one hundred percent, which is why I say, we shouldn’t be divided, it should actually be a very easy choice.

You seem to have a lot of confidence in Sanders’ campaign?

– Absolutely. The campaign has been building momentum like no other campaign we’ve ever seen. I mean he is literally building a grassroots movement as we speak. And now there are local unions that are coming out in support of and endorsing Bernie Sanders, and there is a wildfire of support from the rank and file.

How would you describe the atmosphere in New Hampshire, compared to Iowa?

– One difference is of course that this was a primary, as opposed to a caucus. So it’s been a very different style and format. In Iowa we were waiting for caucus results, where they allot delegates based upon the caucus process, whereas here, this was a straight up primary, a secret ballot vote where there will be no delegates – so this is a winner-takes-it-all state. But the atmosphere has actually been very similar, though with the colloquial differences between the two states. The excitement is unbelievable. The young people that we’ve seen out in the streets and that we’ve encountered… The enthusiasm among the millennials, it’s unheard of. It’s incredible, really, we have this candidate that is an older democratic socialist who has ignited a fire among the youth of this country. It has really shaped their understanding of what socialism is.

So the word ’socialism’ is not perceived as frightening in the US anymore?

– Not for that generation. Absolutely not. They are completely open to it. They understand the concept of socialism in the context of: “This means public schools, this means that I can afford to go to college and a public university without coming out with a huge debt”. So there is no fear for them in that word – it means a public good.

What is next for you?

– When I leave here I will be going to Nevada. Every victory builds momentum. And this momentum is only moving forward and building across the country.