In the past week UN delegations to both the European Union and the United States have held a panel discussion on the dismantling of democracy in Cambodia. 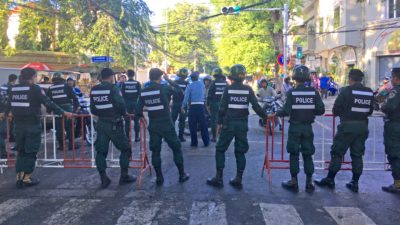 Cambodia: The Birth of a Dictator

In a pre-emptive response, the Cambodian delegation sent an official letter addressed to all the UN member statesexpressing dismay and deeming the initiative as arrogant and disrespectful. The Cambodians saw it as “a serious interference in the internal affairs of the Kingdom of Cambodia”.

One of the panelists was Kem Monovithya of the oppositional Cambodia National Rescue Party, that was dissolved in November in a verdict made by Cambodia’s Supreme Court.

Kem Monovithya is the daughter of the former CNRP leader Kem Sokha, who was jailed in September accused of treason. The evidence for that charge was a film from 2013 in which Sokha spoke of lessons that can be learned from other countries on how grass root movements can bring about political change.

The Supreme Court verdict forcing the dissolution of the CNRP was based on the accusation of conspiring to bring the reign of Hun Sen, who has held power for more than 30 years, to an end.

In the local elections last summer, the CNRP made significantgains. But with the jailing of Kem Sokha and the dissolution of the party, Hun Sen has cleared any threat to achieving a new victory in the upcoming elections of July 2018.

In recent years, oppositional political parties and unions have been banned and activists have been jailed. Media critical of the government have been forced to close.

Human rights organisations and other international organisations have acted against the repression of the freedom of expression and of association.

The Swedish Labor confederation LO, the Swedish industrial union IF Metall, as well as the aid agencies Union to Union, Forum Syd and Diakonia, are among those that have for some time been involved in increasing international awareness of the situation. 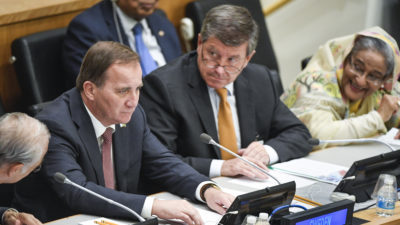 Cambodia no longer compliant with the Global Deal

With exceptions for education and research, Sweden has taken the step to freeze all aid to Cambodia, which over the four previous years had totaled around 100 million Euros.

Cambodia are also part of the Global Deal, the project initiated by the Swedish Prime Minister Stefan Löfven. Cambodia signed the agreement to create a social dialogue involving the government, the unions and business.

The European Union and the United States have stopped all financial aid for next year’s elections. The EU has also threatened to withdraw the preferential status that Cambodia enjoys in its trade with the members of the European Union.

Last week, the European Parliament voted to consider the upcoming election illegitimate unless the largest oppositional party is allowed to participate. The parliament also encouraged Cecilia Malmström, the European Commissioner for Trade, to suspend the existing preferential trade terms with Cambodia.

Cambodian Prime Minister Hun Sen has not shown any willingness to appease international opinion. In a speech he gave in Phnom Penh last week, he even encouraged the EU and the USA to impose more sanctions.

“I want to encourage the EU to freeze the property of Cambodian leaders”, Prime Minister Hun Sen said defiantly, according to news agency Reuters, adding that Cambodian officials do not have any assets in the EU or the USA.

While relations between Cambodia and the West havecooled off recently, Hun Sen’s government has a strong ally in China.

According to Reuters no other aid donor can measure with Chinese support to Cambodia. Last year, Chinese aid reached beyond 200 million Euros, which is four times more than US aid and more than ten times greater than wat Sweden provides.

Despite this defiant stance, Cambodia’s Minister of Commerce Pan Sorasak is reported to have warned Hun Sen that a changed trade relationship with a loss of the duty free status, might cost the country over 600 million Euros annually, according to Voice of America.

• Cambodia has about 15 million inhabitants. The country lies between Thailand and Vietnam

• Between 1975 and 1979 the communist party and the guerrilla movement The Khmer Rouge were in power. This regime of terror has been assigned the blame for the deaths of close to one fourth of the population, most due to starvation but also through execution.

• The Khmer Rouge were ejected from power by the Vietnamese army that occupied Cambodia from 1978 to 1991. During this period the country was a one party state as the Cambodians Peoples Party were the only party permitted

• In 1985 Hun Sen became Prime Minister. He had been the Foreign Minister from 1979. Since 1992 Cambodia has been an independent multi-party state, although CPP have won every election and remained in power

• Of all political leaders in the world, Hun Sen's duration as Prime Minister is the longest.

• The Cambodian economy has had an annual growth of between seven and eight percent on average since the 1990s. The portion of the population that lives in poverty has decreased by half since 2007 and stands now at 13.5%.

• The main domestic sources of income come from the textile industry and from tourism. Several Swedish fashion companies buy clothes from Cambodia. The national minimum wage is insufficient to cover living costs and many garment workers have uncertain terms of employment.