The novel Kvarnstenen, The millstone, is a rather common sight in Swedish bookshelves. Margaret Drabble met success with her third novel, also in Sweden, in the 1960s. In the 1990s, I studied English at university, I was given the task of analysing the novel.

The main character, Rosamund, a well-brought-up daughter of Labour voting middle-class parents, works on her PhD. When she gets pregnant, she decides to keep the baby –after a half-harted attempt to abort the child – not telling the father.

I did like the novel, but had some trouble with the analysis. Why was it so hard for Rosamund to tell the truth to the father of the child, George? In December Margaret Drabble visits Stockholm in order to talk about The Millstone, and two other recent reprints in Swedish: Realms of Gold and The gates of Ivory.

Why did you write The Millstone?
– I wrote it when I was expecting my third child. I had three children in a short period of time, and although I was not a single mother – I was married – I was very interested in motherhood. The episode when the child has a heart leasion, was taken from my oldest child. He was three or four, and had had a heart problem, so it was very much in my mind: the stress of the mother when some serious illness or defect occurs and how it was handled.

You can see a change in Rosamund when she gets the child.
– Yes, she thinks of herself as very independent, looking after herself, but of course, when you have a child you get more involved in the lives of other people. You become more dependent on other people. I wanted to show the whole shift it makes in your personality, when you become a mother.

And there is that scene when Rosamund is not allowed to see the child for a fortnight after the child’s operation, and that is central?
– It is indeed central, and that was an issue in England in the 1960s.There where very old-fashioned regulations of permissions to hospitals, there where parents not being admitted. And although the welfare state was generous in some ways, it was also quite controlling and prescriptive. You had to behave properly in order to be treated properly.

– That all worried me, the autonomy of the mother not being respected, and the scene that I wrote when Rosamund makes a big noise in the hospital, that has probably been one of the most effective scenes that I have written, in that I know that nurses and doctors use it in training courses. And the whole attitude towards allowing people into hospital has changed completely. Now you are allowed in, allowed to sleep with your child in the room. There is a much more understanding attitude. So I like to think that I have played

Class is also a theme in The Millstone. Rosamund thinks that she is better treated because she is upper middle class, and the doctor knows her parents.
– That is another aspect of it: She had the confidence to protest, because she felt she was well connected. And in fact, as so often, there is a network of people, and you find it easier to get your way through, and that I think is still true. In every country.

But Rosamund was worried about this?
– Of course, she thought it was unfair, she thought everybody should have the same treatment.

And that is your opinion as well?
– Of course. In Britain we have a class system, I do not think it operates quite as much in the National health service, but maybe it does. I hope not.

What was the reaction to The Millstone back in 1965?
– It was very well received and read. There were some reactions, not against her being a single mother, but against the fact that the issue of abortion has even been raised. It was serialized in the radio, and in those days you never mentioned abortion, menstruation, cancer… Now you mention it all the time. Because it was on the radio, it reached a bigger audience than the readers, and people did write in and complained.

What are the reactions now from first time readers?
– Quite a lot of young people say that their mothers and grandmothers have recommended the book and that they have enjoyed it. Sometimes they tell me that some of the issues have not changed that much. Because having a child as a single mother is still potentionally very difficult. Motherhood is difficult anyway; you need a job and child care, and in Britain we have not solved the question of childcare. There are still big issues of working and having children that have not been resolved.

How has your authorship developed from the early books until now?
– I think the early novels were a lot about women issues, about domestic claustrophobia, the feeling of being trapped inside the home. I was really very housebound with three small children. As time goes by, the books have gone into wider areas. I have travelled more, I confront bigger issues.

What are the issues that engages you the most now?
– There is the unanswerable problem of unequality. The banking crisis was a great chock to the western Europe and to America. The globalization of wealth has raised huge issues, which one novelist can not possible handle. One novelist can not write a global novel about banking.

– There is a very good novel by a chap called John Lanchester, Capital, which is about one street in London and the effect of that street on property values, and how we all are affected by property values, how London has become a different city. It is now considered a financial capital, foreigners park their money in property and normal British people can not afford to buy. So that’s a huge issue, not just an English issue. The richer get richer, the poorer get poorer. We now have a potential for everybody to eat well, but because of the unequal distribution, of food and money, people are starving. Even in England, people go to food banks which seems ridiculous, when you think of how wealthy Britain is.

– Another very interesting issue, which is connected, is global warming, the ecological state of the world, and the fact that the storms are increasing and the floods are rising, and climate change is escalating. You can have conferences about it, but actually changing people’s mind is very hard. I’ve written about French investment in British electricity, In Britain we tend not to own anything we have sold it to other countries. I think this is very dangerous. You are in the mercy of global fluctuation.

– The whole problem with refugees across the Mediterranean – I have just finished a novel in which I touch on that theme, it is a great human tragedy and it has been caused by the Middle East just going up in flames and nobody knowing how to stop it. I do not say I know.

The novel The Dark Flood Rises will be published next year, in English.
– It is about climate change and the ominous state of the world, but also about aging and the fact that as you get older, things seem darker. Because you have not got the energy to turn the lights back on.

What can you tell us about aging?
– You can not do much about that, but is very interesting to observe. My novel is about how people accept or do not accept aging.

– It is about a group of families, friends, acquaintances, mostly in their seventies, and how they decide to live. Who looks after who. And we also see their children and how they think about their parents. It is February and raining all the time, but one couple has gone out to live in the sunshine of the Canaries, so you contrast with their lives. And the refugees from North Africa impinge on there lives, that is a part of the plot.

And the refugees, are they aging too?
– No, the refugees are on the whole young. I have one refugee from Senegal in my novel and he is going okay, he finds a European sponsor. But the older people just die. The younger people send money home, if they get by, if they are very successful.

Were the themes easier for a writer in the 1960s than now?
– Well in the 1960s I was just very young and I had a small world to write about. I was to busy staying alive, and as you get older your curiosity about the wider world increases.

But is it not also a change in society, do you think?
– Yes, the world was there, but the information culture was enormously different. In the 1960s, we were very interested in what happened in Europe.

Are these three reprints a good way of entering your authorship?
– Yes, the three reprints actually cover quite a wide range of my work. The Millstone, is a very early book, Realms of Gold, is from the middle of my career and The Gates of Ivory, is quite late. I think the Realms of Gold, is a good optimistic book, in which things on the whole go well, that might be a good way to start. A strong woman, archaeologist, has a rather good, interesting life.

Why do you write?
– It is a habit. I started to occupy myself when I got pregnant, and I became a public successful writer.

Some people can not do anything else when they have children?
– I think you can, it is a question of getting up early or getting to bed late. If you just spend all your time with small children … You must do some adult things. My father was a lawyer, my mother had been a teacher, but she stopped teaching as mothers did. Both read a lot, and both reading and writing seemed serious things to do.

Have you had the same thoughts as Rosamund, of being more privileged than others?
–  Yes, I am very preoccupied with the fact that life is very unfair. My parents were born into quite ordinary families and had to work hard. For my generation it was easier, and for my children; life gets easier with success. I do still feel that people are getting very unfair advantages.

– In Britain we are still very obsessed with social class, although we say we are not. Very little has changed. It is very hard. The Labour party, which is supposedly supporting the working people, is not representative. Very few people in politics are from the working population. The unions have very little power, they have been bashed to pieces by Mrs Thatcher largely, they had a lot of power during the 60s.

– It is depressing. I really thought in the 1970s that we moved into a more classless society, but Thatcher priced success higher than everything. She was not interested in equality. She sold out social housing, she was short sighted. She did not believe in redistribution, but in competitive capitalism and that is were we are now.

As she does not want to disturb the hospital in the middle of the night?
– Exactly. All those decisions that women quite often make, they do not want to be a nuisance. And she does not want to upset his life. And also, she is telling the story, so you do not know whether to believe her or not, maybe she just wants to keep the baby all to herself. People keep the most amazing secrets. 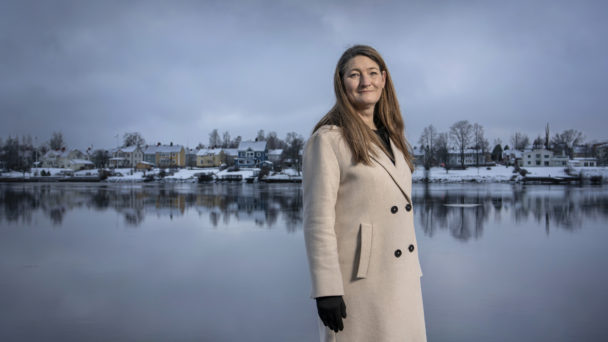